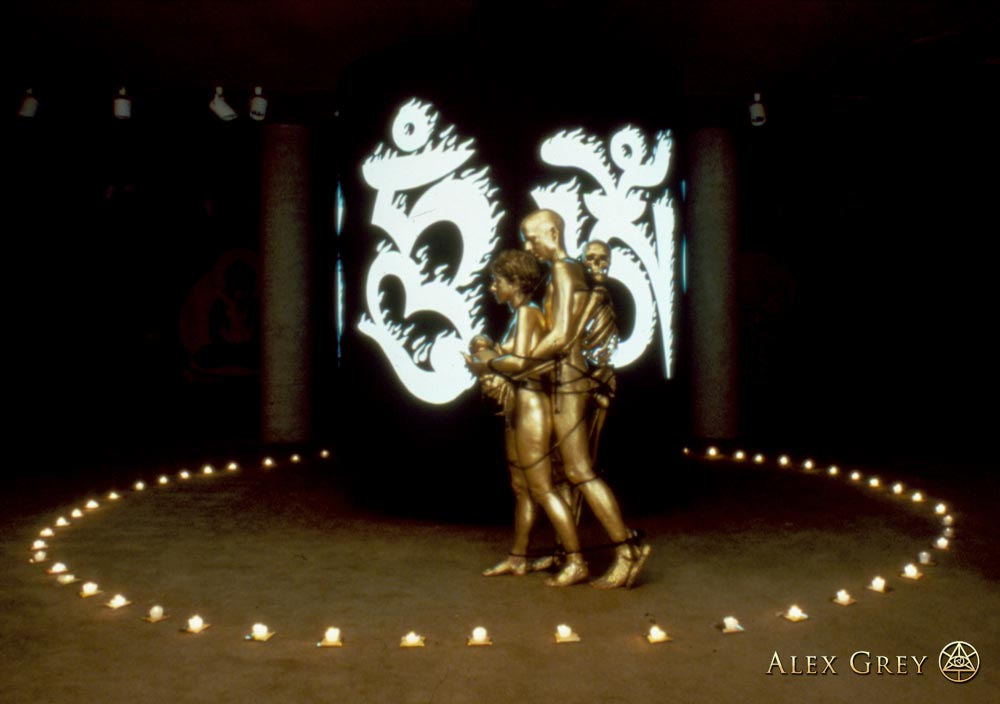 Prayer Wheel
1983
University Gallery, University of Massachusetts, Amherst
performed by Alex Grey and Allyson Grey
In Tibet, prayer wheels are used by monks and laity to increase the power of their meditation. Carved or printed on all prayer wheels is the mantra – Om Mani Padme Hum – literally meaning, Om, Hail the Jewel in the Lotus, Hum. With the correct understanding, the mere utterance or inspection of this mantra is believed to transport one directly to paradise. The mantric prayer is dedicated to the Buddhist deity of active compassion, Avalokitesvara.
It is said that when Avalokitesvara saw the suffering of the world, He sprouted one thousand hands and arms to assist the world, each palm containing an eye of unobstructed vision. In the performance of “Prayer Wheel” my Alex and Allyson were bound together along with a skeleton, while holding a realistic baby doll and a knife.

Our bodies were all painted gold. We were attached to the Prayer Wheel which turned as we walked around it chanting the mantra. After circumambulating for an hour and a half, Alex cut the rope attaching us to the Prayer Wheel and we walked out of the space. Sound was recorded at the Avalokitesvara Initiation given by Deshung Rinpoche in Cambridge, Massachusetts, January 1983